If you have ever driven from state to state, you may notice signs posted at borders, which describe the texting laws for specific states. With the increasing popularity of mobile devices, state governments have created laws which limit the use of the phone while on the road. Mobile devices are linked to a rise in distracted driving which leads to loss of life also. Expect to see texting and driving laws changing in Florida and across the country in the future. 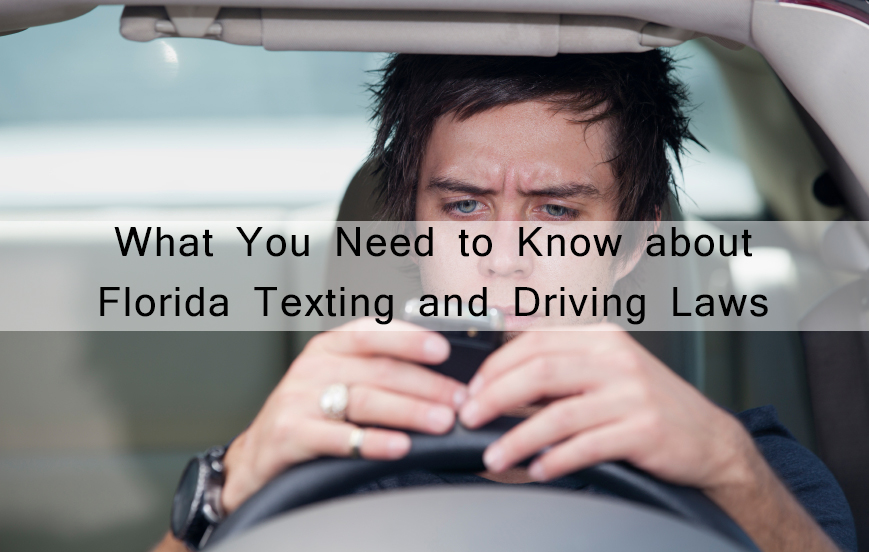 To put some things into perspective for drivers and innocent passengers, the dangers of texting while driving were calculated. In 2012, the National Highway Safety Administration reported that distracted drivers were the cause of 18 percent of fatal crashes. Perhaps the most startling statistic was found by the Virginia Tech Transportation Institute, which reported that text messing increases a crash risk by 23 times.

Other statistics concerning texting while driving include:

In the state of Florida, the texting and driving law was put into place a little over two years ago. The wording of the only law passed is:

“A person may not operate a motor vehicle while manually typing or entering multiple letters, numbers, symbols, or characters into a wireless communications device or while sending or reading data in such a device for the purpose of interpersonal communication, including, but not limited to, communication methods known as texting, e-mailing, and message.”

Simply put, drivers cannot type into a keyboard, send, or read message while driving. The most interesting part about this law is that is a secondary law. You cannot be pulled over for the infraction of texting but it can be added onto another violation. An example would be if you were texting and you ran a red light, you get an additional ticket on top of your traffic citation for running the light.

This law is worthless according to some because it only allows a ticket on top of another violation. As of January of 2015, the current law has only resulted in just over 2,000 citations which is not much considering the amount of texting and driving occurring while people drive. It is important to know your own rights in the state of Florida and the rest of the country while you are driving.

When it comes to texting and driving, it is best to be avoided for your own safety and the safety of other drivers. Technically a police officer cannot pull you over for this offense on its own but the officer can find an infraction you are committing and add it to your original citation.

For example, speeding is not uncommon but drivers believe they will not get pulled over if they are going a few miles per hour over the limit. An officer may choose to pull you over for speeding when he or she may have let you go by if you were not on your phone. Aside from the monetary consequences of texting and driving, you do not want to hurt anyone when it can be prevented.

In recent updates, legislation concerning distracted driving as a result of mobile device use is under consideration by the state’s House of Representatives. Every few months new distracted driving bills hit Tallahassee but in recent past they have not taken hold. Proposed changes to the existing law have passed in other states like Maryland. The basics of a bill introduced on April 30, 2015, include:

If passed, these laws could go into effect as early as October of 2015 but there are research requirements necessary before the bill can be put into law. The research is necessary to conduct because they may investigate the use of other devices in the car and include those in the ban. A person can get actually pulled over for this offense, which would lead us to a dramatic increase in the number of citations written for texting and driving.

There is no telling when the state legislature will pass all of the texting while driving laws which have been proposed. For some reason, the state of Florida has delayed passing these rules for much longer than other states. It is possible the federal government will step in to pass a nationwide law.

So what can you do in the meantime? It seems inevitable that texting legislation will pass. Giving up texting and driving is easier said than done. When you are in the car alone, looking at your phone quickly does not seem like a great risk. On a road without anyone around you or in a situation which seems to be safe, it does not seem that big of a risk. To prevent touching your phone or getting tempted to text, consider trying to implement habits such as:

When you have caused or been involved in a texting and driving accident, you need an attorney to represent your interests in court or represent you in the claims process.

If you or a loved one is injured in an accident, visit www.glotzerlaw.com or contact Glotzer & Kobren, P.A. at 561-361-8677 to discuss your rights. Serving Boca Raton, Delray Beach, Boynton Beach, Deerfield Beach & throughout Florida.