Responsible in a Personal Injury Claim

If you’ve been involved in a car accident—or any type of accident, for that matter—then you know that it sometimes can be difficult to determine who is responsible for the accident. In accidents that involve multiple drivers or multiple parties, it is helpful to have an experienced personal injury attorney on standby… 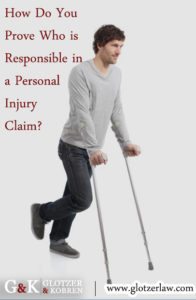 While the state of Florida operates under a “no-fault” rule, that doesn’t mean you can’t file a personal injury claim.

If you want to determine liability in a personal injury claim, then it is important to determine if carelessness was involved to a degree—either on the part of the victim or the individual who caused the accident.

Each Case is Different

In some cases, if the injured person was careless as well as the motorist (comparative negligence), then the injured party’s settlement may be reduced. That means carelessness on the part of the victim will be considered during the settlement phase.

So the question now is: How do you prove the party responsible in a personal injury claim and do you have to prove it? Some answers were already provided above, but let’s look at an example…

In this case, pictures would be taken of the back of Sharon’s car and sent to the insurance company’s claims department.

If there were witnesses to the accident (other drivers, passersby, etc.), then this information would become evidence in the case.

After the police report to the scene of the accident, the officer would speak to any witnesses present. The police report would also be evidence that Sharon could use for her claim.

But there are some variables in this case, isn’t there? Some of these variables involved in proving which person is responsible include:

Jack could argue that Sharon wasn’t paying attention (maybe he saw her talking or texting on her phone) and was forced to stop abruptly.

When an accident occurs, the injured person must prove carelessness or negligence. But there is no quick formula to prove negligence.

It depends on the particular situation, case, and parties involved. And if you aren’t familiar with the law, then you could hurt your personal injury case.

If you are involved in any type of accident—whether with motorists, on someone’s premises, on the job or in a grocery store—you still need the expertise of a personal injury attorney to help with your claim.

An attorney can help to determine who is legally responsible for the accident and build a case around the facts. While determining the at-fault party in an accident might seem obvious, facts and proof are still required to prove your case.