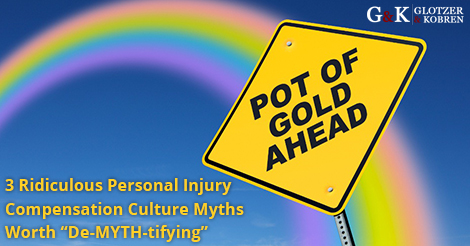 There are many stereotypes out there about the personal injury compensation culture, but they overlook the reality of the situation and the suffering that many people go through in the wake of an accident.

For those suffering, an accident can turn their world upside down, which is why some of these opinions about compensation culture are pure myths.

Here are some explanations behind each myth and our attempts to “de-myth-tify” them:

What is Compensation Culture?

Compensation culture refers to situations where a person believes they are entitled to compensation for even very small injuries or situations. Regardless of blame, this applies to a wide range of situations.

For example, people could even claim that they need compensation for an injury where there was no one to blame. In situations where common sense should have been the guiding factor, compensation culture instead leads people to think that they are owed money for their injuries.

Since successful personal injury suits are published and shared all the time, there’s a general perception that it’s easy to win a personal injury case. Speak to any individual who has gone through this process and lost—or received a much smaller settlement than expected—just how much work it takes to put together a compelling case.

In many scenarios, it involves months or years of preparation and a lot of hard work from a good personal injury attorney. It’s not easy, but the fact that people hear of huge damage awards from time to time makes it seem as though it’s commonplace for an injury victim to walk away with a large settlement post-accident.

Many people around the world are familiar with the high rates of litigation risk faced in the U.S. and the UK because that’s what the media tells us. This is why some experts argue that compensation culture is actually a myth perpetrated by the media. By focusing on sensationalist stories that get people’s attention, the media tends to make it look like compensation culture is much more common than it really is…

Since some of the stories getting published border on the line of being ludicrous, and it leads some people to think they have a personal injury claim anytime they’ve been injured. It also spurs what propels the media myth. These stories garner attention, but they also tend to be the minority and not the most common type of personal injury case.

The fact that these ridiculous stories get so much attention (and perhaps rightly so) fuels the fire that it’s easy to get money for your injuries. In the long run, this can do more harm than good when it comes to people who have actually sustained serious and lifelong injuries from an accident.

By perpetuating the belief that society is overzealous with lawsuits and the desire to be compensated, it’s harder for those truly suffering to get the financial support they need to recover from an accident and move on.

Have you been injured in a big accident that has left you paying the price for someone else’s negligence? If you’re in this position, it’s unlikely that you feel as though a lawsuit trying to pursue damages would be a frivolous one. As you live through the difficulties of trying to pay medical bills and get your life back on track, it’s not surprising that you might be interested in learning more about your rights in a personal injury suit. If this describes you, sadly you are not alone. You may need a legal claim to help you move forward.