Car accidents happen frequently on our roads. According to the National Highway Safety Administration (NHTSA), more than 6 million road accidents are reported yearly of which up to 3 million result in injuries, 2 million of these permanent.

Additionally, 25% of the total road accidents require legal representation from a team of Boca Raton car accident attorneys. Check out this site here to read more facts from the NHSA. 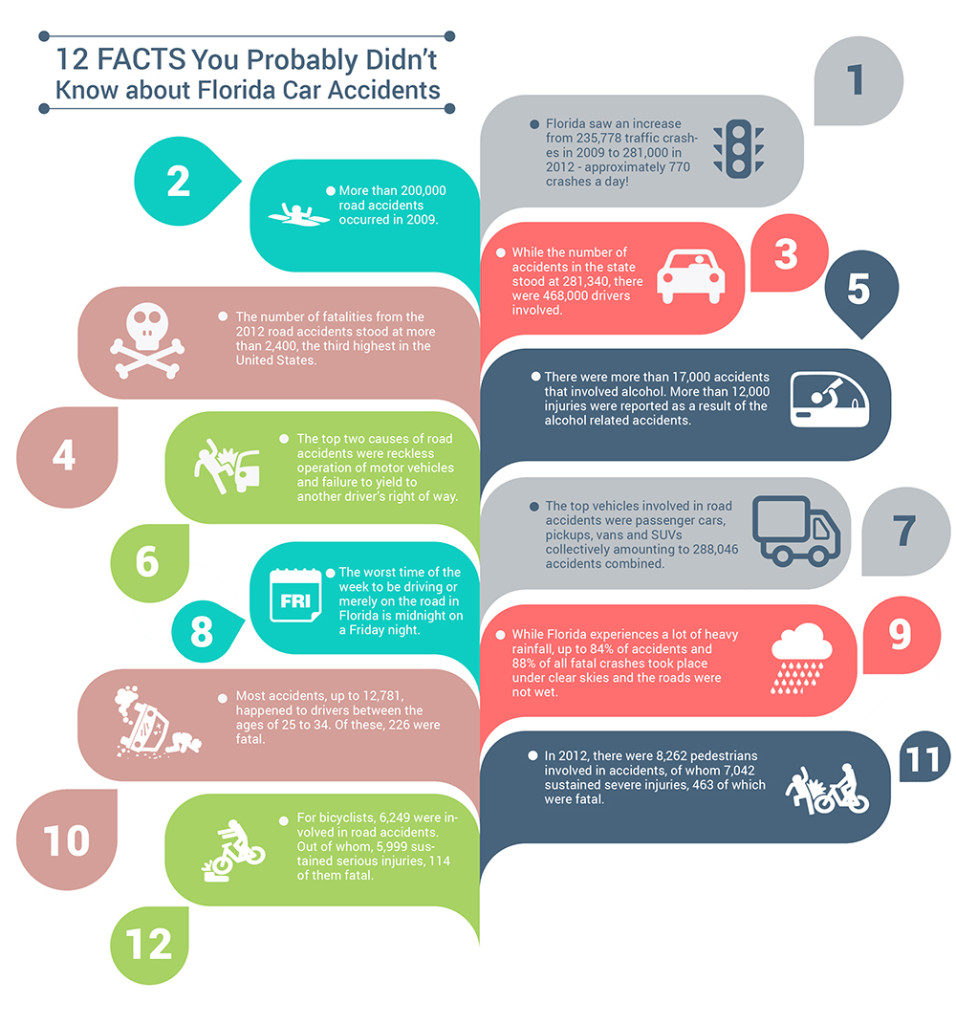 The Devil in Florida’s Driving…

Florida, a state with a rapidly growing population and many young drivers, has one of the largest driver populations in the United States, standing at 16 million.

Every year in the state, over a million tickets are written for careless driving signaling the high prevalence of driver recklessness on the roads. This is why Boca Raton car accident attorney recommend caution when driving in the state.

Read on to learn some shocking facts about driving and car accident statistics in Florida:

It doesn’t stop there. Here are more damaging facts about motor vehicle accidents in Florida, from data collected by law enforcement agencies in 2012:

2. Top crash causes: the top two causes of road accidents were reckless operation of motor vehicles and failure to yield to another driver’s right of way.

3. Alcohol and driving under the influence: there were more than 17,000 accidents that involved alcohol. More than 12,000 injuries were reported as a result of the alcohol related accidents.Of the total fatalities that year, drunk drivers were involved in up to a third of them.

5. Time of day accidents occurred: the worst time of the week to be driving or merely on the road in Florida is midnight on a Friday night. The most accidents and the most fatalities, as a percentage of their totals, occurred at this time.

6. Road conditions: While Florida experiences a lot of heavy rainfall, up to 84% of accidents and 88% of all fatal crashes took place under clear skies and the roads were not wet. Only 6.5% of the accidents were caused by bad weather.

8. Pedestrians and bicyclists formed a significant portion of the car accident victims. In 2012, there were 8,262 pedestrians involved in accidents, of whom 7,042 sustained severe injuries, 463 of which were fatal.

Read more information about driving statistics in the state of Florida here.

Road accidents can happen at any time of the year and to anyone using the roads. Boca Raton car accident attorneys advise everyone driving, cycling, skating or even walking along the road to be cautious, especially when there is bad weather, road construction, plenty of traffic on a high speed highway or at night.

Recover with a Team of Boca Raton Car Accident Attorneys

Knowing what to do and who to contact immediately they happen can save you thousands in medical bills, ensuring you get a quick and peaceful recovery.

Visit here to learn more about how a team of Boca Raton car accident attorneys can help you.