Theft and Fraud: Uncommon Types of Nursing Home Abuse You Should Know 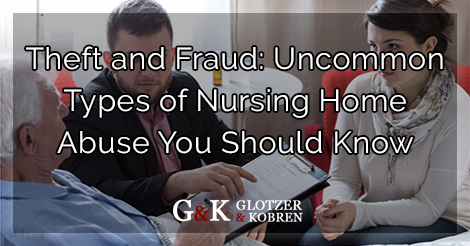 Elderly individuals are particularly susceptible to financial scams and theft. In fact, this type of theft costs the elderly population roughly $3 billion every year; it is obviously a serious problem, and loved ones need to keep an eye out for this type of abuse. Unfortunately, as the baby boomers reach retirement age and beyond, this problem is only expected to increase.

Why is the Elderly a Target for Financial Abuse?

Many people assume that scammers target elderly individuals because they cannot mentally keep track of their finances any longer. They assume that elderly people make good targets because they forget things and because they will not know if funds or property goes missing. However, some of the scams or theft are extremely believable, even for younger individuals.

Scammers and thieves may specifically target elderly people because they are the population most likely to have extensive savings and wealth. In fact, roughly 70 percent of the wealth in America is owned by people who are over the age of 50. In addition, those in nursing homes usually do not have as much control or oversight over their money, making theft that much easier.

Theft and Fraud in Nursing Homes

Nursing home residents have a right to be free from abuse and neglect while living in a nursing home. Theft and fraud, however, can be extremely difficult to detect because it is not as obvious as physical, or even mental abuse.

Nursing homes have a duty to protect their residents, and this may include protecting them from financial peril as well. Read more about Florida law on personal property of nursing home residents.

The various types of theft that could occur in a nursing home setting include the following:

Theft of personal items is one of the most common types of theft that occurs in nursing homes. Theft in a nursing home can include items such as:

These items can not only have significant monetary value, they can also have memories and sentimental value attached to them.

Other Types of Nursing Home Theft

Theft can also occur when the resident has visitors, but the nursing home may or may not be responsible for this type of theft. If you think your loved one has experienced any of these circumstances, it is a good idea to first confront who you think may have committed the theft or fraud, and then speak with a Boca Raton nursing home abuse attorney as soon as possible. Contact us today.