How a Better Economy Has Lead to More Car Accidents 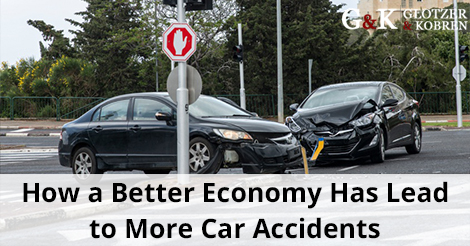 A rebounding economy and dropping gas prices have caused more motorists to hit the road, resulting in an uptick in accidents and fatal crashes, according to the National Safety Council (NSC).

The NSC analyzes crash data for the first six months of the year to get an idea of how many traffic accidents and deaths may occur in following years.

Interestingly, a report published by the NSC claims that the 18,630 motor vehicle fatalities from January to June 2015 are a 14 percent increase from the same six-month period in 2014.

The “State” of Traffic Deaths (Not Just in Florida!)

Unfortunately, the jump in traffic deaths in Florida is even worse. Recent data reveals there were more than 1,400 motor vehicle deaths in Florida between January and June in 2015, which is a 29 percent increase from the first six months of 2014.

This increase in auto accidents is one of the highest in the country. Florida is ranked second, after Oregon, in traffic fatalities during the same time period.

Florida also has the unfortunate distinction of being one of just three states to report more than 1,000 traffic deaths during the first six months of the year for 2015.

Besides Florida, Texas and California were the only other states to see more than 1,000 auto accident deaths in that time period.

The personal cost associated with these fatalities and injuries is incalculable. There is also a concrete cost to taxpayers, which takes into account the cost of property damage and injuries.

In this article here by Newsweek, according to data from the NSC, the cost of car crash in its reporting period comes in at $152 billion, which is a 24 percent increase from 2014.

The rising numbers can most likely be traced back to two factors: a better economy and cheaper gas.

According to the NSC, gas prices have dropped 30 percent since 2014, which means more people are inclined to travel by car, even for longer trips.

Additionally, an improving economy means more people are getting back to work after periods of unemployment, which means more motorists on the road, commuting to work.

Furthermore, the summer months tend to see the highest number of car accidents for the year, since speeding and alcohol consumption usually increase.

These warmer months are especially dangerous for teen drivers. In fact, the National Highway Traffic Safety Administration (NHTSA) has dubbed it the 100 Deadly Days of Summer.

Car Crash in Florida? Get Help with a Boca Raton Car Accident Attorney

As experienced Boca Raton car accident attorneys, we know how much accident victims and their families suffer following an accident caused by another person’s negligence.

If you have been hurt in an auto accident cause by someone else, you should get in touch with an experienced Boca Raton car accident attorney as soon as possible.

Your attorney will explore what types of compensation you may be owed for your injuries and damages, while informing you of what to expect in your future.

Visit here to get started with a Boca Raton car accident lawyer.