Reasons Why Florida Highways Are So Dangerous

A survey of the AAA Auto Club South concluded that 76 percent of members believed that road debris is a problem on Florida’s roads. Perhaps this is because there are about 17 fatalities that occur every year because of highway debris in Florida. 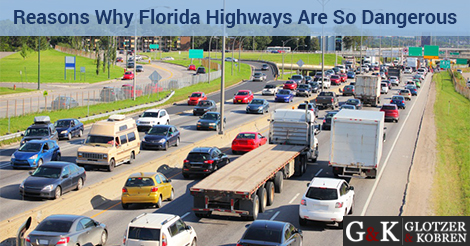 Either way, it can be a hazard for other drivers and cause further accidents. Even very small debris can become extremely dangerous when it is hurled at high speeds.

Avoiding road debris can cause erratic avoidance maneuvers, which can cause a crash as well. It can be somewhat difficult to determine who is liable in that type of situation. Every accident is unique, so speak with a Boca Raton car accident lawyer for analysis of your specific situation.

What is Road Debris?

Road debris can be literally anything foreign in the road. It can include items or cargo that has been dropped by other vehicle. It can also occur when someone’s tire blows and it leaves scraps along the highway. Either type of debris can cause a secondary accident. South Florida’s roads are particularly dangerous.

Why Florida Highway Accidents are so Dangerous?

Below are a few examples that occurred right here in South Florida:

Sometimes, flying debris is outside of the driver’s control. In other situations, debris is dropped because it was not tied down properly or the driver failed to perform proper maintenance on their vehicle.

Debris causes roughly 80 to 90 deaths every year in the United States, and it causes more than 25,000 accidents every year.

While some of these types of accidents are unpredictable, most are preventable. People simply need to tie down their cargo better to be sure it does not fly off their vehicle and cause another accident.

Like most crashes, the question for liability is going to be whether the person at fault was negligent. This means that the driver had a duty to others on the road and he or she violated that duty.

For drivers, making sure that your car is properly maintained so car parts aren’t flying off and ensuring cargo is tied down is part of that duty. The problem is that sometimes it is difficult to stop or find those who have dropped debris.

Those who are avoiding debris already on the road have the duty to drive in a reasonable manner that does not harm others.

If they swerve into you to avoid an object, then they are likely still going to be at fault for your damages if their maneuver was not reasonable.

Do You Have a Case? Find Out with a car accident lawyer in Boca Raton

Determining what is reasonable and what is not is not nearly as straightforward as you might think. Having an attorney who can do this type of legal analysis for your specific situation is extremely important.