Should Florida Pass a ‘Textalyzer’ Law? 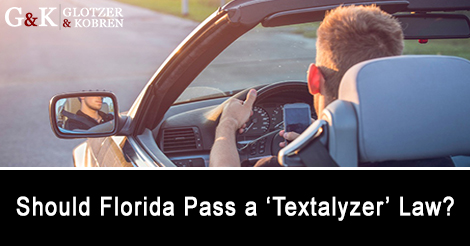 Most people know distracted driving is a big problem on the roads today. Chances are, you have encountered more than one motorist more concerned with what’s on his smartphone screen than what’s in front of him on the road.

Most people don’t leave home without a cell phone or smartphone. The public’s dependence on smartphones and instant communication has caused distracted driving-related traffic accidents to skyrocket.

Too often, we see innocent people in our Boca Raton auto accident law firm who have been seriously injured by distracted drivers. The surge in these types of crashes has led some states to begin looking for ways to stop drivers from texting behind the wheel.

In New York, lawmakers are considering a “textalyzer” that would allow police to determine if a motorist was on a smartphone prior to a traffic stop.

Currently, New York lawmakers are debating a new law that would permit police to use a device to digitally scan a smartphone’s operating system for purposes of determining whether the driver was sending a text or email while driving.

The device derives its name from the commonly-known breathalyzer, which is used by police to determine if a motorist was drinking and driving.

New York drivers are banned from texting as well as using handheld devices behind the wheel, the textalyzer device could be used to stop many drivers who violate the state’s distracted driving laws.

Unlike New York, Florida does not prohibit motorists from using handheld mobile devices. This means it is unlikely Florida lawmakers will pass a textalyzer law any time soon.

As a motorist in Florida, you can legally send and receive calls from your mobile phone, whether you use hands-free technology or you hold the phone to your ear. However, Florida state lawmakers did pass a Florida Ban on Texting While Driving Law in 2013.

The statute prohibits drivers from reading, manually typing or entering text into a “wireless communications device”. The law is a secondary violation, which means a police officer can issue a citation for texting and driving only after stopping a motorist for another suspected violation.

Florida’s texting and driving law may not be as strict as similar laws in other states, but Florida lawmakers are definitely aware the state has a serious distracted driving problem.

In fact, Florida has more “safe phone zones” than any other state in the country. Like rest stops, safe phone zones are designed to give motorists a safe place to pull over and make a call or send a text without putting themselves or other drivers in danger.

If you’re a driver in Florida, you already know the highways can be dangerous. As the economy recovers, more people are getting jobs and hitting the road for work commutes and long overdue vacations. This is a good thing, but it also means more distracted motorists on the highways.

Florida is also one of the most popular tourist destinations in the country, which means it sees a lot of out of town drivers. Although tourism is a major industry in the state, it also contributes to a lot of traffic congestion and auto accidents.

Call Today If You Have Been Injured by a Distracted Driver

Florida highways are dangerous enough as it is. When distracted drivers hit the road, they put everyone in more danger. As Boca Raton car accident lawyers, we know how devastating a car accident can be for the driver, his or her family, and any passengers in the vehicle at the time of the crash.

Contact us today to discuss your case with an experienced Boca Raton personal injury and car accident attorney.