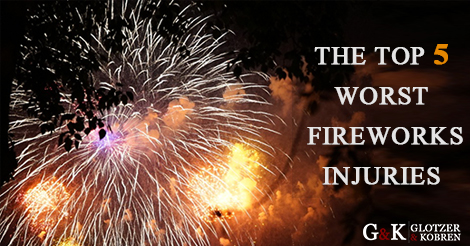 If you’re like most people, you plan on celebrating the 4th of July with a cookout, a dip in the pool, and a fireworks display. Although the majority of fireworks are illegal for consumer use in Florida, that doesn’t stop people from purchasing them and setting them off in the backyard.

As Boca Raton personal injury lawyers, we have seen firsthand just how dangerous fireworks are when used improperly and illegally.

Here are five of the worst fireworks-related injuries:

At a fireworks display in Simi Valley, California in 2013, a firework detonated prematurely, causing it to knock into other fireworks and set off a chain reaction of uncontrolled explosions.

Thousands of spectators panicked and fled the area, resulting in 28 injuries to adults and children who had gathered to watch the fireworks display.

Amputations are a common fireworks-related injury. For one California man, using fireworks at home cost him his right hand and three fingers on his left when a mortar-style firework detonated in his hands as he was lighting it in his driveway. The accident also cost him his livelihood, since he could no longer working in the construction industry after such a significant amputation.

A defective firework may have been responsible for a horrific accident in North Dakota. In 2011, a man was decapitated when he lit a firework outside his home. The explosion was so violent, it completely destroyed his upper body.

Fireworks can also cause severe injuries to spectators and innocent bystanders. Such an incident happened in England in 2012, when a man launched a firework at a teenage boy.

According to police, the incident was a deliberate attack. Unfortunately, the boy lost vision in one eye.

Homemade fireworks can be especially deadly, since they often contain volatile chemicals and materials that have been outlawed in the United States.

In 2013, an Ohio man suffered devastating, permanent injuries when a bag of fireworks he had purchased from a home-based fireworks maker exploded in his face.

He lost his left forearm and hand, most of his hearing, and a great deal of his vision. He also suffered serious burn injuries.

According to one report, the fireworks the injury victim purchased were the equivalent of dynamite. The individual who manufactured and sold the fireworks was charged with making illegal explosives – a felony in Ohio.

Fireworks are popular during the summer months – especially around Independence Day.

According to the Consumer Product Safety Commission (CPSC), about 230 people are injured by fireworks around the 4th of July. Burns accounted for half of all fireworks-related injuries, but many people also suffered vision and hearing loss due to fireworks accidents.

The vast majority of these injuries are entirely preventable. When people use fireworks improperly, or purchase fireworks that are banned for consumer use in Florida, they risk serious and life-changing injuries.

It’s also important to remember that even so-called “safe” fireworks can be dangerous.

For example, sparklers are permitted for consumer use in Florida, but the CPSC reports that nearly 20 percent of all fireworks-related accidents involve sparklers.

Fireworks are a great way to celebrate the summer with friends and family, but they are not risk-free. Even a public fireworks display can result in injuries.

If you or a loved one has been injured in a fireworks-related incident, you have important legal rights. Talk to a Boca Raton Fireworks Accident Lawyers today about your options.