Men vs. Women: Who Is Safer Behind the Wheel? 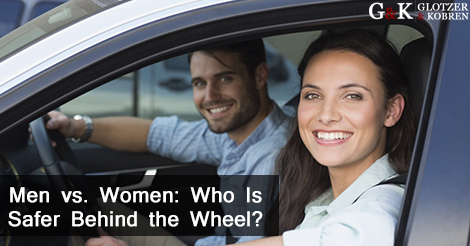 Is there really a gender gap when it comes to driving? Does being male or female make you a safer or better driver?

Some people claim men are better drivers; others insist women are more careful and thus end up being safer behind the wheel. As Boca Raton car accident lawyers, we wanted to know what science has to say on the subject.

Interestingly, there are more female drivers on the roads overall, but men still drive more miles than women. Men are also much more likely to be involved in a fatal accident compared to women.

Researchers at the University of Michigan Transportation Research Institute looked at how the demographics of licensed drivers have changed over the years.

When they examined U.S. drivers between 1963 and 2010, they discovered that men now account for less than 50 percent of all licensed drivers in the country. At the same time, men account for 59 percent of all miles driven annually.

In short, there are more women on the road, but men drive more, which could explain why men have more accidents than women.

Also Read : Aggressive or Defensive Driver: Which One Are You?

The Gender Gap Is Closing

Safety experts say the gender gap among drivers is closing, and it may be due to the popularity of smartphones – especially among teen drivers.

A survey co-sponsored by Liberty Mutual revealed that a growing number of teenage girls reported near misses while driving due to distractions caused by smartphones, music, and other causes.

According to a report published by the National Safety Council, smartphones now account for one in four car accidents. Moreover, just five percent of crashes studied in the report were caused by texting.

The majority of accidents were caused by drivers talking on the phone. The report also says drivers didn’t necessarily reduce their risk of an accident by using a hands-free device.

Texting and driving has become such a big problem, some states have even contemplated passing “textalzyer” laws that help police determine if a motorist was typing on a phone or reading a text at the time of a crash.

Also Read : What You Need to Know about Florida’s Texting and Driving Laws

Cutting Down on Driver Distractions

Male or female, anything that takes your eyes or attention off the road can lead to a car accident. Smartphones are a leading cause of driver distractions, but other things can be just as deadly in the car.

Motorists have been in accidents after adjusting the controls on their instrument panel or attempting to type an address in a GPS.

Other people have been injured in a crash caused by someone who was eating and driving. Even talking to a passenger while driving can lead to an accident.

If you have been injured by a negligent driver, get answers and help from a Boca Raton car accident lawyer. Call today to schedule your consultation.