Can I Sue over a Sunburn? 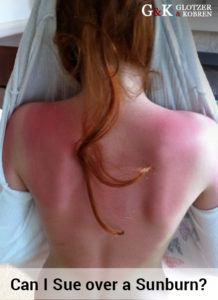 Florida is called the Sunshine State for a very good reason. As the southernmost state in the contiguous 48 states, Florida sees a lot of sunshine. Sun overexposure can happen quite easily, even if you try to keep to the shade.

For much of the year, and throughout the summer months, sunburn is a near-constant threat in this part of the country. Most of the time, sunburn is caused by an accident or perhaps just forgetfulness.

Everyone has seen someone who has fallen asleep at the beach and suffered the painful consequences.

But what happens when sunburn is caused by negligence? Adults know that children are especially vulnerable to sun overexposure.

What if a caregiver fails to apply sunscreen, or allows a child to remain outdoors for hours during the hottest part of the day? Alternatively, what are your options if your sunscreen fails to guard against burns?

If you, your child, or an elderly loved one has suffered a serious burn due to another’s negligence, you may be entitled to compensation for your injuries. Call a Boca Raton personal injury lawyer about your case.

No matter how diligently you apply sunblock, you can be seriously burned if the lotion you’re using fails to protect your skin.

In 2015, the baby and beauty care company co-founded by actress Jessica Alba was the subject of a $5 million lawsuit after consumers claimed the company’s sunscreen contained misleading information on its label.

Founded in 2011, The Honest Company quickly made its way onto retail shelves and into homes across the country. The brand touts itself as being non-toxic and chemical-free.

According to the lawsuit, the company’s claim that its sunscreen lotion provides 80 minutes of water resistance, as well as broad spectrum skin protection against UV rays, is misleading.

Many consumers took their complaints to social media, posting photos of serious sunburns they say they received after using The Honest Company’s SPF 30 sunscreen.

The Honest Company is not the first sunscreen manufacturer to come under fire for allegedly engaging in deceptive advertising. In a 2006 class action lawsuit, plaintiffs filed a claim against five of the sunscreen industry’s leading companies.

In that case, the plaintiffs claimed the companies’ ads falsely promoted the products as protecting against UVA rays, when really the sunblock creams only stop shorter-length UVB rays.

Sunburns Caused By Neglect and Abuse

In some cases, sunburns occur because a caregiver or other adult failed to apply sunscreen or take appropriate steps to protect a child or vulnerable adult from the sun.

Tragically, these cases happen far more often than many people realize. In 2015, two young brothers in Oklahoma had to be airlifted to a pediatric hospital after they received second- and third-degree sunburns at a daycare field trip to a water park.

According to the Oklahoma Department of Human Services, the day care closed permanently the day after the incident.

Children aren’t the only ones who can be victims of neglect and abuse in the context of sun overexposure. In May 2016, a 65-year-old resident of a Florida nursing home died of heart failure after he was left in the sun for hours on a 90-degree day.

He suffered second-degree burns and blisters on his abdomen. The resident was also dehydrated at the time of his death. The Tampa Bay Times reports that the nursing home has been fined at least three times since 2012 for substandard care.

Tips for Staying Safe in the Sun

According to WebMD, the best protection against the sun is staying out of it altogether. Because this isn’t always desirable or practical, here are some ways to safeguard against sunburn:

WebMD also recommends staying out of direct sunlight during the middle of the day, which is roughly between 10 a.m. and 4 p.m. This is when the sun is at its highest position in the sky, which makes the skin more vulnerable to harmful ultraviolet radiation.

Get Help from a Boca Raton Personal Injury Lawyer

Seeing a child or vulnerable loved one hurt is devastating. When injuries happen, you want to hold the person who caused the harm accountable. A Boca Raton personal injury lawyer can help you get the compensation you and your family deserve.