Unfortunately, surgical errors are one of the leading causes of medical malpractice not just in Florida but around the country. 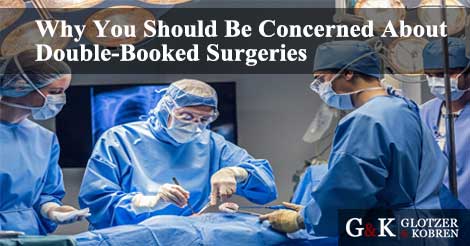 Before going into the operating room it’s important that you have an established rapport with your surgeon and that you are aware of his or her schedule for a couple of reasons.

Did you know that even if you have a surgery on the appointment books and the surgeon has promised to be in your room, that it’s actually possible that he or she could be supervising your procedure while operating on a separate patient in a separate room? Unfortunately this happens often, whether or not you know about it.

According to guidelines from the American College of Surgeons released in April, patients should be informed if a surgeon who is managing a procedure is planning to be responsible for supervising another surgery at the same time.

While these guidelines are certainly critical, they are not legally binding and there are no penalties for noncompliance.

According to experts, it’s common practice for some patients to be completely unaware that a supervising surgeon is actually responsible for two procedures at the same time.

Although you may be under the impression that the supervising surgeon will be there for the duration of your surgery, it could be troubling to learn that he or she will be outside the room for at least some of the time period in which you are going under the knife.

These same experts indicate that overlapping procedures and scheduling are happening nationwide, especially in teaching hospitals where staff may be in high demand or when an assisting surgeon who is going through fellowship training could be tasked with sewing up the patient after procedure as the lead surgeon leaves for the next room.

One of the most important aspects of these situations have to do with when a surgeon is responsible for managing critical components of the surgery itself.

Critical components of various surgeries are determined by a surgeon although this practice has gotten some criticism from the surgical field.

Although overlapping surgical schedules are still relatively unknown in the medical malpractice field, research from Massachusetts General Hospital reveals that there were at least 44 problems between 2005 and 2015 associated with concurrent surgeries.

If you are heading into the operating room, have a conversation with your surgeon ahead of time about whether he or she has other operations scheduled during the same time period.

Understanding what is going to happen in the operating room will not only ease your fears but it will give you a better understanding of what to expect.

If a surgical mistake is made, for example, you will want to know the details about who was in the room when it happened.

If the supervising surgeon was not in the room and handling another surgery instead, this could become important information in your Florida medical malpractice case.

The sad reality about so many surgical errors is that they could have been easily prevented.

There are many different elements that can impact whether or not you suffer as a victim of medical malpractice, but having to worry about whether the surgeon responsible is actually around should not be one of them.

Surgical errors are not the only reason that you could find yourself as the plaintiff in a medical malpractice claim.

The most common causes for medical malpractice legal claims around the country include:

Regardless of the root cause of your claim, you have rights. Finding a lawyer you can trust is an important step in recovering compensation for your injuries.

Make sure you file your claim in a timely manner. This could be imperative for protecting your rights going forward. Learn more here: https://www.glotzerlaw.com/what-is-the-statute-of-limitations-for-personal-injury-in-florida/